Whilst in London, I was really lucky and got to visit the amazing menswear designer Saran Kohli! The Saran Kohli brand is recognised for combining classic English tailoring with an urban touch. The signature slim cut jackets are made from luxurious silk, wool, velvet and jacquard.  The likes of Jay Sean, Mumzy Stranger, H Dhami and many others have been seen in his designs. The Saran Kohli line is geared towards the man looking to reflect his personalised style with hints of global culture and music, in his clothing and he recently launched his new studio in the family run Khubsoorat boutique in South Woodford, London. Read on to hear about where Saran’s inspiration came from and to also see some wonderful photos of his beautiful collection!

END_OF_DOCUMENT_TOKEN_TO_BE_REPLACED

So, Versace recently revealed their menswear line for the SS16 season. It seems as though the designer has definitely taken inspiration from the Persian/ South Asian culture, with the long shirts which are more commonly known (in the Asian culture) as ‘kameez.’ The Arabic music played at their fashion shows brings in an exotic and international aspect to their line. 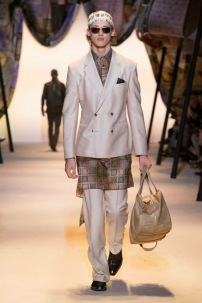 Versace describe their collection as that of “Desert mood and tones” which is clearly represented in their choices of beige and red colour choices. The designer has gone for a more ‘relaxed’ fit in their clothing to suit their brief of this collection being for the “man who is an adventurer in what he wears and also in his travels”. The choice of soft, flowing fabrics look extremely comfortable and the addition of double-breasted blazers and ties, bring in a western feel to the looks.

I feel as though their new collection is definitely going to be a hit with the eastern countries as Versace have tweaked fashion styles that are already present in the east. However, it seems as though the designer may struggle in Europe and some parts of the U.S.A as this new line could be thought of as feminine due to the fabric choices and shirt lengths. However long t-shirts have suddenly boomed in the fashion industry so there is nothing stopping Versace from re-inventing menswear clothing.